Diaries of the MCC

for students, by students

Read our blog posts & submit one yourself!

Story of Our Names Series

Names carry meaning and power. we explore what our names mean to us through this series.

Lilianne Chang Tang. That’s what it says on my birth certificate. My first name is spelled incorrectly because my mom didn’t know English very well at the time. It was supposed to be spelled as L-i-l-l-i-a-n. But instead, it’s L-i-l-i-a-n-n-e. Chang is my mom’s last name and Tang is my dad’s last name. My parents are not legally married, but they made sure that whatever happened, each of them would always be a part of me.

I actually hated my name growing up. Lily-ANNE. It sounded so white on paper. The last syllable - always emphasized for no reason at all. Frequently misspelled and mispronounced because the Ls and Is were too confusing – how many are there of each and where do they even belong? I’ve been called Lianne, Lily Annie, Lilani, and even simplified to just plain ‘ol Lily. I hated the spelling of my name so much that through most of my K-12 education, I used Lillian on all of my school documents. I even refused to share my middle name because Chang and Tang together sounded too closely to a racial slur. ..Read more 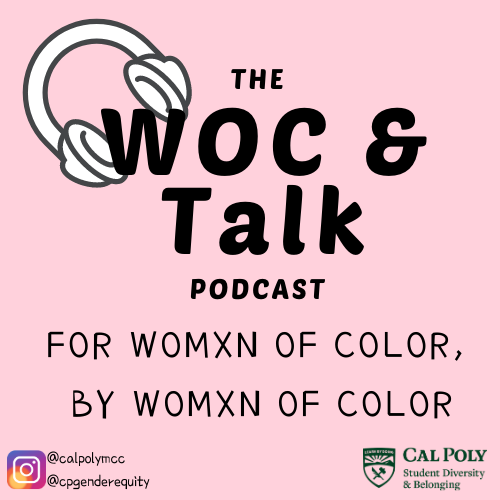 Join Camille (MCC) and Isabella (GEC) as they discuss what it means to be a womxn of color in today’s ever-changing world! The WOC and Talk Podcast is a program that is by womxn of color, for womxn of color and addresses a wide array of perspectives and experiences that are salient to those who hold these identities. From breaking down traditional gender roles to navigating predominately white, male spaces, this podcast touches upon topics that can be insightful for all audiences!

I think, lately, all I’ve been seeing is, like, “womxn” with the “x” hasn’t been doing the work that people say it does. Like, it’s not actually being, like, not actually being inclusive not actually doing the work that they want it to do because it’s just a word, but people are using that, but not taking it further and actually trying to be intersectional, including people in spaces. And, like, if you use that word you wanna do more, but people are not, so it’s becoming kind of a thing, like, just like using the word “woke”, and like, that’s it. And like, intersectional and just like flash words but not doing anything behind that work. - Isabella Matthews